How do you get inside your characters, make them feel, breathe and come alive, in a performance that is both natural and appealing?

I wish to discuss in this post how to add in that layer of performance, when the character has limited body movement. 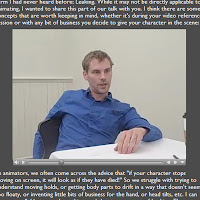 To start with I wish to point to Eric Scheur's fantastic resource in 11 Second Club's helpful hints. Together with Chris Murray, he explores how to break down the dialogue itself, hunting for what the character is thinking between each line. Grab a pen and paper. Ask yourself about the character, create a backstory.

Next he leads you to the idea of 'Leaking'. In nervous, crazy or excitable characters, lots of movements can be appropriate. Look at Hammy from Dreamwork's 'Over the Hedge'. The little guy just doesn't know how to sit still.

Howeever a confident character, if he is completely comfortable, can be portrayed completely still. Even movement of your little finger can break a performance.

I now wish to present Michael Douglas's performance on the site Fourteen Actors Acting, produced by the New York Times.
http://www.nytimes.com/interactive/2010/12/12/magazine/14actors.html#index
Look at his hand movement. Calm, considered. The movements are an indication however of his thought, yet you can tell he is a man of strength and power.

Please check the site out, it has some other fantastic performances. Analyse the differences, why the actor/actress has made that decision. Check out the contrast between Michael Douglas and Javier Bardem's performance.

A lot of the performance can be produced just by the movment of the eyelids. Watch this performance from The Departed. Dicaprio's character is lying for his life. He needs to choose his words carefully. While his body language remains still and confident, you can see the thinking just through the character's eyes.

The animator who brought this clip to my attention is Kyle Kenworthy, whose blog contains other great performances which you can learn from. I particularly like the Forest Gump clip. http://kylekenworthy.blogspot.com/search/label/Acting%20Reference

Hope this has been of some use :)
Posted by mini challenges at 08:47