Although often advised to keep fixed shot positions when beginning your animation education, learning about camera movement in film can add another weapon to your arsenal of tricks when applying texture to your shot. 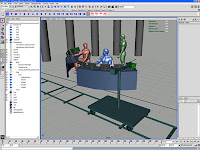 A recent post on the 11 second club site spoke about the use of a virtual dolly to aid realism to your shot. In virtual space, we have near limitless freedom when positioning the camera. The virtual dolly could be used as an aid to force the animator to think about why a camera is should be located in a particular spot.


Of such usage, Keith Lango wrote 'I've been at studios that have built and used such a rig. I've made a few myself. Nothing says fake like the floaty, weightless camera work of an unconstrained camera in CG. A rig like this forces you to shoot a scene like it's on a real film set. If I have a shot that requires any kind of flying camera or crane shot I often use a rig like this'
Jais Bredsted presents an interesting choice of camera positioning for his class 4 Animation mentor work, replicating what would be a webcam.

Vimeo Video school
To understand the rules of a composition in animation, it is best to study how camera footage is used outside the animation areana. Vimeo video school has many online tutorials, which are certainly worth checking out. They range from explaining appropriate use of editting, to fancy camera tricks

Posted by mini challenges at 06:55