Re-doing a shot: getting rid of the mental block 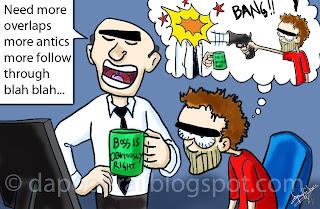 So how many of you can relate to the poor animator in the pic? I can!

Like every other animator out there, when I was starting out, I used to face this enormous overwhelming challenge of redoing shots. “What the heck! Now I gotta change all my animation that I almost starved myself to create??” That thought would creep me out (it still does)! However with time and practice, when I somehow pulled this fear out of me (at least to quite an extent), I realized that wasn’t so scary after all! "Maybe it was just me and my silly mental block! Doh!" I concluded.

But nope! It’s not just me! A recent interaction with a friend fairly new in this field made me realise that it’s not as easy to remove that ‘mental block’ as I thought. Much of the lot seems so attached to their work and forgiving of their mistakes that any changes suggested could as well mean murder!

Truth is, the real animation world out there isn’t so forgiving. If a shot needs changes, it needs changes. Get that right or get fired!

The first thing you gotta do is lose the love for your shot. It’s okay to appreciate that you have an ability to create something of this caliber, but kindly keep it to that. ANY shot (I repeat ANY shot) has the potential to be better. A very talented friend of mine once said “An animator never really finishes his work, he simply surrenders!” So unless you’re married to your shot, lose the love.

There’s another factor why animators fear incorporating changes: LOW CONFIDENCE. This applies fairly to the newbies. They don’t exactly love their shots, they know there are problems in them, but at the same time they just can’t seem to gather enough confidence to make changes, fearing it might end up looking worse.

In either case, it’s all a matter of thinking. You need to mentally prepare yourself when you work on a shot, that you might be asked to make changes. And when someone does suggest changes, you should tell yourself over and over again “Yeah I need to change that” rather than “Oh man now I gotta change that??” The former thought process creates a certain uneasiness within you and subconsciously you feel restless until you finally incorporate those changes. It also prevents you from being complacent. Okay I agree it’s definitely human to think "Oh man now I gotta change that??". What makes the difference is how fast you switch to "Yeah I need to change that".

You need to make a start someday. This mainly applies to students and people who are learning on their own. It’s better to get used to redoing shots as early as possible when there’s no one looming over your head with a deadline sword. That way at least you’ll get some practice and later on actually perform better in a production when there is someone looming over your head with a deadline sword. Because then you will have gotten used to making changes in your shots rather than freaking out saying “What the heck! Changes?? Nobody taught me that in school!” You become flexible.

Let me give you my own example of how I went about getting rid of that fear.

I am definitely not someone who loves his shots. I was more of the not-confident type. I remember in my animation school (Takshaa), when I was in my first semester (on learning basics), I did two shots as assignments (ball-box, and ballman-ball interaction). I was suggested some major changes to improve them. But I was pensive! “Who’s gonna go through all those graphs again?” Eventually I didn’t make any changes thinking I’ll get used to redoing shots later with time.

I went to the second semester and did some walk/run cycles. Once again changes were suggested. Once again I got pensive, thinking I would incorporate changes in my next assignment, even though all the while knowing that those changes are needed. And sure enough I didn’t make any.

Then I did a jump. Changes suggested again. Me pensive again. Me thinking again “Okay next time for sure”. But this time I had an additional thought “I can’t keep procrastinating like this.” That’s all it took to break the ice. Those 6 words! That thought process created the required uneasiness in me.

So I chose a day and sat down to make changes And yes, it was tough! I hesitated to even touch the controllers. It was a struggle all the way, first to get rid of that mental block, second to actually change the animation. It wasn’t easy also because initially the changed action wasn’t really looking good (animation principle wise), and plus my previous saved version was always there tempting me to give up and be complacent with it!

I still kept going, and finally one fine day it started to look good, or I dare say, even better than the previous version! Below are the videos to show what I mean.

Okay agreed, the animation isn’t really all that great when I look at it now, but the important thing is, I overcame that fear! It gave me a sense of accomplishment! And that’s when it hit me: changes aren't really that scary! It completely 'changed' my perspective!
And since then, I’ve been on a roll! Removing this fear even made me grow as an animator. I’ve happily welcomed changes in my shots and each time I incorporate them I see that they really push the piece further.

A very prominent example I can give you is when I was blocking out a shot for the 11SC July 2010 contest. Changes were suggested to go for a completely new acting choice and set up, and further below is what it finally looked like.


So yeah it’s really all in the head! You can’t let that simple mental block (which isn’t as scary as you think anyway) get in your way of improvement. Try it once and you'll see for yourselves. Once you get rid of the fear, you’re already halfway there. The other half, where you actually make the changed animation look good or better, is only a matter of time. :)
Posted by Dapoon at 10:39