I wish to thank Vivian for granting us his time in order to share a few words about his shot production.

I hope you guys enjoy!


When did you realize you wanted to get into animation, and how did you first go about learning?
In 2002 I was studying Industrial Product Designing in Toulouse, in the south of France. I one day realized that I wanted to do something more artistic and creative.
I had a big decision to make. I've always beed amazed by cartoons, 3d pictures and general animations we could see appearing more and more in movies. I searched and found a 3d school in Montpellier.
During the second year of learning maya software we began to explore the animation part. As I just started my first animations exercises, I realized it was just I was looking for. Creating movements on puppets was really magic.


I see you've worked on many commercial projects, while also on film ''La Mecanique du Coeur'. Please talk a bit about the difference in these experiences.
The main difference between these experiences is the time you have to do the job. On commercial projects you can have very short deadlines so you have to work fast and be reactive in front of director wishes and customers changes. I had to work with small teams and talk a lot about technical constraints, shots repartition, animation style throughout the process. This create a good dynamic and great exchange with people you work with.

On the movie you really have more time to plan and polish your animation. Characters had a real background. We had a precise description of characters states of mind and thoughts for each shot of the movie. This was really helpfull to create credible acting movements and leads you in the right way. I loved to work on this project, this was really acting animation and to meet and work with many talented people was really exciting. Unfortunately, for my first experience in full cg movie, the production just stopped in the middle of the process, due to financial issues.

(click here to view reel)
You have mentioned you don't plan your animation with drawings, a habit you wish to change. What changes and developments do you hope this will have upon your existing practice?
Yes there are a lot of things I have to do to improve my animation process. I know planing is a very important part and I often denigrate it because I'm too impatient...
Making drawings, filming myself, thinking more about staging the scene are things I have to work on. These could all help figure out what works and what doesn't.


Please talk a bit about your process for your winning entry.
What I did first was to listen the sound clip and look for a little context to fit characters in a story. The king's cake tradition came to my mind and I thought it could be funny to play the scene with that. Then I listened the sound clip lots of time to find out the characters' feelings and states of mind.
I loved the contrast between the two characters and found lots of inspiration in the tone of the voices.

This inspired me a lot during the blocking process, trying to find the right poses. When I felt confident in my blocking, of course spline and then the polish process came after.

I also spent time doing some modeling, cloth. Too much time I think. I didn't want to rely on that, I just wanted to dress characters in the way people could easily recognize the right king and the fake one. it was a mistake because clothing doesn't work very well and it lost me a lot of time which I could have used to polish my animation.

To finish a friend helped me for lighting and the rendering.


Digging into your clip, I wish to compliment the confidence you express when animating the hands. It reminds me of the great work done on the Grand Duke in Cinderella. Please talk a bit about this.
Thanks for the compliment. I just thought hands could be useful to enhance the steward's character, using exaggerated poses and movements to match his fake and arrogant personality.

His talking way was confident, so I had to move his hands to show that. I wanted to make him as a noble arrogant guy, a little effeminate. I put these ideas into my blocking, making hands poses which could illustrate this type of character. Like at the beginning when he's drinking, and eating in a fake aristocratic way, the way he's holding the piece of cake while he's talking...

It reminds me the homeless drag-queen character in the Satoshi Kon movie: "Tokyo Godfather". He moves his hands a lot while he's talking and I think it really nicely shows off his personality.


I can see a further comparisons with Cinderella, in the relationship between the two characters. Both stories present a sarcastic steward/grand duke who fails to avoid provoking the king's explosive temper. May I ask where you gained inspiration for your characters?
Listening the sound clip a lots of time, I looked for a little context to fit the characters. I was focused on the sentence: "you said you didn't want it"and scratched my to find an idea on what the king didn't want. Then the king's cake tradition came to my mind.

Maybe not all people who watched my animation understood its context. It's based on an European tradition. During the epiphany period families eat king's cake where a trinket is hidden. The person who finds the trinket becomes the king for the rest of the day and has to wear a fake paper crown.
So I thought the king could be the winner but didn't want to take the fake crown because he's got a real one, and the steward just wanted to make him angry with his arrogant acting and way of talking.

For inspiration, I animated both characters separately. That's why they looked different, but I mainly wanted them as funny as possible.

I love Jim Carrey who exaggerates a lot his acting just to provoke laughter. I think my inspiration comes a lot from those kinds of comedians.


Many voters enjoyed the moment the king bites on his knuckles through anger and frustration. I also enjoyed the little overshoot on the crown around frames 202-212. Where did these ideas come from?
The crown had to look in paper, like a postcard, so I used a bend tool to animate it. For the biting part, it came naturally. Actually I do it a lot with my friends when we are joking about together.


Voters also enjoyed the snappy movement of your characters, particularly the king. His poses contain many straight angles in comparison to those of the steward. Please talk a bit about animating in this style.
It's funny because I was more focused on the steward's acting. I thought he was more interesting to animate. His relaxed and arrogant way of talking inspired me to make his moves smoother. In contrast, for the king I just wanted to make him really angry so his poses were pushed more straight and snappy. Technically, it was a struggle to find right timing and spacing. During spline process I did a lot of playblasts to figure out what works and what doesn't and had to move my poses in time to find the most efficient timing.


I love your use of mouth shapes, particularly those on the king's steward from 298 to around 316. What is your approach when animating the mouth?
Actually I wanted to use the steward's jaw to make him even more arrogant. I was inspired by his British accent and I had the idea to advance his jaw while he was talking to ehance the fake acting. For the frames 298 to 316 moment, I wanted to push the dynamics of the jaw animation in each frame to show him his change from being funny to afraid.

I generally use a mirror to figure out my moves for lipsync. For all the steward's "T" "D" "S" I used mouth shapes as to show his teeth,while its important for all mouth openings to fit arcs including on the jaws.

Unfortunately, the steward's jaw and lipsync looked better on playblasts. I believe the lighting and the shadows disturb a little his mouth and expressions. This is something I plan to fix.

Kenny Roy mentioned how difficult it is to animate one 11 second shot, getting things to flow continuously without a cut. Did you find yourself struggling with any part of the animation?
I want to thank Kenny for his many advices and corrections, it's really great to get great feedback. He's completly right, it's really hard to keep things continuous without a cut. I was fighting against myself because I wanted to focus on the steward's acting, to show him first but I liked the idea of his knuckle biting. Finally I kept it, and it worked's well but interrupts a lot what I wanted to show first. I confess I never had the idea of fitting a cut and it definately could be a solution.


Talk about one or two parts of the eCritique that enhanced or expanded on the ideas you had originally set out to animate.
Kenny mentioned to build the scene with 2 or 3 shots, it's definetly a thing I have to think before beginning to animate. In differents parts he talked about using body to enhance movements credibility, like on the steward sit on the chair when his leg is moving, or when the king pulls the chair. His critics about arcs are really helpful too. I know I have to spend more time to polish them. 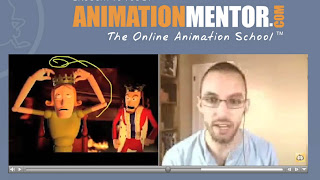 (click here to watch Kenny's ecritique)
Do you intend to return to this piece to incorporate the suggestions made in the eCritique?
Yes I think about making some changes during the coming weeks. Great thanks to Kenny again


What advice would you give to anybody new to animation and its community?
To work hard, question yourself, and the most important have fun!

To participate at the 11 second club contest is really interesting, it was my first participation and it was great to see all competitors ideas.

Interview by Steven Hawthorne
Posted by steven hawthorne at 12:03