Recently, I contacted Eric Scheur regarding bringing back his beloved winner interviews for the main 11 second club site. In his reply, Eric provided lots of support and advice, including encouraging words to take over the reigns. Thank you Eric.

Presented below is the winner interview for Leo Ito, winner of the April contest. I wish to thank Leo for granting me his time, it has been an absolute privilege contacting you. Thank you

1) If you could be one cartoon character, who would it be and why?
Tasmanian Devil. It would be fun to run around as a tornado!

2) This is your first entry to the competition, tell us about your animation journey so far.
I studied classical animation for 2 years at Capilano University, in Vancouver. After working as an animator and character designer for a couple years on some Flash animated TV series, I moved to Ireland and worked at Cartoon Saloon. I worked on the animated TV series “Skunk Fu” as an animator and storyboard artist. When the production was finished, I moved to Denmark to enroll in a 3D animation course at the Animation Workshop in Viborg. Once I completed the course, I moved back to Vancouver and worked at Blue Castle Games (now Capcom Game Studio Vancouver) as a cinematic animator for “Dead Rising 2”. When that production ended, I left the studio and have been doing freelance work since.

3) Your reel has some great pieces of animation. I particularly love the opening, the alien and spider clip. Its story springs many surprises and grabs the audience due to its unusual context. May I ask where you turn for inspiration?
I find inspiration in all kinds of places, and usually when least expected. But for that particular piece, I got the idea when I was watching the DVD "LIFE" and "Planet Earth". I've always found it interesting the way certain features of animals are used for defense, or just ways to catch a meal. So I wanted to animate a simple story of a creature in the forest having a little snack. The rig I found had a helmet like head, so it seemed like a fitting way to "crush" its food, before eating it. 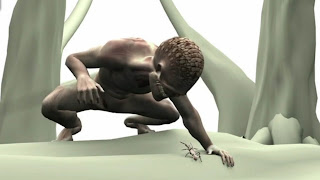 To view Leo's showreel, click here
4) With current debates at present concerning lighting and rendering effecting voting, it was great to see a your simple Film Noir style win the competition. I'd love to hear about your design process for the clip.
I'm a fan of simple designs with strong impact, so I try to achieve that in most of my work...actually, I'm just lazy and don't know how to do the fancy stuff I see in some of the winning animations. Just like many others who submitted a piece for this competition, the image I had when listening to the clip was clearly a film Noir style. This was a big plus for me since eliminating the design element of color meant one less thing to think about. My knowledge is very limited when it comes to modeling, lighting, and other post-production processes, so by keeping it simple, I was able to achieve the look I had in my head. 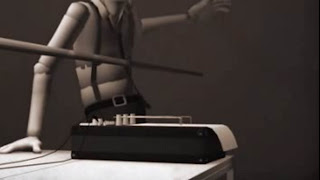 The polygraph was modeled from basic polygons, but other than that, almost all the props are free models I downloaded on the net (Leo Ito comment written on the voting wall)

5) Focusing on the style choice, the shot of Pinocchio is very dark, with these two contrasting eyes staring out at the detective. It is said that the eyes indicate if somebody is lying. Was that part of the style choice?
I definitely wanted it to be clear that this Pinocchio was sort of a con artist and more mischievous, so it was important that his facial expressions conveyed that. I wanted the audience to feel that he was up to something.

6)What were your first thoughts upon hearing the audio?
As I mentioned before, the first image that popped into my head was an old black and white film look. After listening to it a couple times I envisioned a man strapped to a polygraph, and being interrogated. But this idea was still kind of bland to me, so I continued brainstorming for people, or characters associated with being a liar. Lawyer, car salesman, thief, spy, politician, and finally Pinocchio came to mind.

7) Peter Nagy used Pinocchio in his 3rd place entry for March's competition. With so many fantasy characters out there, it is unusual to have a similar character appear in the top entries. Were you aware of this while creating your animation?
To be honest, it wasn't until I was half way in my animation when I saw Peter Nagy's entry. It was a great piece, but as soon as I saw Peter Nagy’s Pinocchio I couldn't help but feel disappointed. I was really hoping to create something different, and the last thing I wanted was to create a piece that was similar to someone else. So I spent some time trying to think of another character to use, but I couldn’t think of a better fit for the part of the liar. In the end, I just decided to go with Pinocchio. Sorry Peter.

(Same great fantasy character, two beautifully unique interpretations)
8) Looking at some of your acting choices, although Pinocchio remains charismatic and appealing, I believe the audience has as much trusts in him as they would in similar level to a dirty car salesman. Also, with the placement of the ashtray, within a short number of frames, we feel Pinocchio's unease at interrogated. Would you like to discuss some of your acting choices?
The shift in his seat at the beginning was certainly an attempt to convey a sense of being uncomfortable, or a “tell” from a poker player. However, for the rest of the animation I wanted Pinocchio to seem calm, like he’s done this before.

9) Were you influenced by any films or actors in particular?
Well, when I heard the audio clip, I thought of a character with a bit of Quint (Robert Shaw) in “JAWS”, and Al Swearengen (Ian McShane) in the HBO series “Deadwood”.

10) Talk about one or two parts of the e-Critique that enhanced/expanded on the ideas you had originally set out to animate.
All the notes were very helpful and appreciated. In particular, the notes on staging (composition), avoiding distracting actions (the bright hand that places the ashtray), as well as the “trick” to add a bit of light around the eyes are great points, and things I will be going back to. Also, the notes on arcs, and creating better silhouettes are very good points. It is sometimes hard to see these things after looking at an animation for so long, and it’s nice to be reminded of the small technical things that are key to good animation. All the notes mentioned will be fixed in order to better the animation.

11) With Pinocchio being such a recognisable character, you must be pleased the ending was successful in surprising the audience with its dramatic growth?
Yes, I thought it was a funny, suitable ending, and I’m glad I stuck with using Pinocchio as the liar. It gave the opportunity to create more of a “punch line” at the end.

12) On the same topic, it was not discussed during the e-Critique, but some of the voter's comments believe adding some opposing forces to the thrust could provide the nose with more substance. Any thoughts?
I’m glad you mentioned this, because I totally agree with the comment. Its something I didn’t think of when animating, and is a great idea. I will definitely be going back to add some kick back to his head when the nose shoots out.

13) This is your first time entering the competition. What inspired you to enter this month?
Well, it’s been a while since I’ve animated anything with dialogue so I thought it would be fun to animate some acting for a change. I couldn’t find any dialogue I really liked, so I went to the 11 second club to see what the new audio clip was. When I heard the clip, I thought it had potential. It was funny, had a nice tempo, and had some interesting accents. I guess I was at the right place at the right time.

14) What advice would you give to other animators?
Find your inspiration, use lots of reference, then some more reference, and have fun. Try to think outside the box and push yourself to create something different and unique.


Interview by Steven Hawthorne
Posted by mini challenges at 03:41