Hello guys and gals,
A few months ago I was gazing through posts on the 11 Second Club forum, when I came across a wip titled 'Meet n' Greet'. Its animation was beautifully rich in content, presenting characters I felt I knew so well. I absolutely had to find out more!

The work belonged to Jamie Giger, who recently landed a position at Blue Sky Studios, working on Ice Age 4: Continental Drift. Below he presents an insight into his workflow.

Recently you have landed a position as junior animator at Blue Sky Studios. How does it feel?
What can I say I’m extremely excited and very anxious to start! I have worked so hard to get to this point that I’m starting to feel a sense of relief but I’m sure that will be short lived because I’ll be working even harder to keep up with some of the best animators in the industry.


You first entered the 11 second competition, way back in 2007. Your entry finished in joint 2nd place. What have you been up to since?
Wow was it that long ago haha! After completing that animation I went on to created two more 11 Second Club animations and at that point I decided I was becoming good enough to start higher quality animations that would take me a little longer than a month to do which are the three animations you see in my 2011 demo reel.

How do you feel your animation has evolved?
Believe it or not, I feel like my animations have evolved because my work flow is constantly evolving. I have studied a lot of animator’s work flows to help approve upon my work flow. Almost every animator’s works differently so I just pick and choose what works best for me.


To my understanding, you have been mentored by Jeff Gabor. Please talk a bit about this relationship?
Jeff and I go way back. We met when we attended the Art Institute of Colorado. We really hit it off when we partnered up for a compositing project that we had to do for class. During college I got an internship at a company that is now called National CineMedia or NCM. I was asked by my boss to find a couple of friends that I thought could benefit the company and so I landed Jeff and another friend an internship there. Around graduation time National CineMedia offered us full time salary positions and we both took the job offers. Since we were mutually looking to live closer to the company, Jeff offered for us to become roommates and I accepted. He later left the company to work on a movie called Delgo that was literally already like six years in the making (if not longer at that time). After that he moved onto Blue Sky Studios. Him and I kept in touch throughout our careers and by kept in touch I mean playing Halo 2, Halo 3 (ODST), and Halo Reach at least once a week haha. Through out our Halo days he would look at my animations and critique them and give me some tips. I knew I was getting better at animating when he would only give me one paragraph to a page of notes and not six to seven pages of note, no joke. All in all, I couldn’t have asked for a better mentor.

Your reel is structured well, with only three pieces of work. You have a dialogue, a pantomime and a body mechanics. What were your intentions when beginning the production of your reel?
Well starting with the pantomime animation (Meet’n Greet), I really wanted to push myself and have two characters interacting with each other and with props in the scene. I also wanted to tell a cunning story without any words that would be fairly funny and entertaining for all to enjoy. With the body mechanics animation (Watch Out It’s a Ninja), I kind of did it for myself and hoped everyone would like it. Not to say that lady animators wouldn’t want to animate ninjas, but as a guy I just had to get a finished ninja animation out of my system haha. In doing so I wanted to show that I can do body mechanics and tell an original story while doing it. For my dialogue animation (I Drink Your Milkshake), a co-worker at NCM found this audio clip from the movie There Will Be Blood and I really liked it a lot and wanted to animate to it. I still want to see that movie... but anyway I didn’t want to do the obvious and have him drinking a milkshake so I made the Norman rig into a drama teacher reading from a book. Overall, I just wanted to challenge myself and tell simple but effective stories while incorporating clever ways to use props into all three animations.

I am a big fan of your pantomime piece 'Meet'n Greet'. Lots of great ideas and beautifully natural acting choices. Where do you turn for inspiration for your characters?
After I came up with the idea I just went for it and setup a camera and acted out both characters. I’d show Jeff what I had filmed and edited and he would have me start over and make me really push the acting to the point where I felt my acting was becoming super cartoony but in the animation it felt genuine and not so cartoony at all which I thought was interesting. So my inspiration just came from how I thought the characters would react to each other.

(Jamie's reference for the shot. Love the fact Jamie has shared this with us. Getting into character may seem unnatural and embarrassing when you first try, but with practice the results can be amazing!)

(Really love how detailed this is. All the detail of timing and spacing worked out at blocking stage)

May I ask also about your animation process?
For my animation process I’ll come up with an idea and then find ways to real push the idea even more. Then I like to act out what I can for reference. After planning is all done, I’ll load Maya up and make key poses for all the characters. I’ll key every body controller and work in stepped key mode. At that point I’ll use the dope sheet to make any timing adjustments. After that I’ll continue to add more poses for breakdowns, anticipation, and overshoot while staying in step key mode and constantly think to myself is this hip, spine, limb, etc. going to slow into the key pose or move quickly to the key pose. Again I’ll use the dope sheet to make any timing adjustments and once I’m satisfied (or Jeff is satisfied) I’ll selected all the keys and use auto tangent script on them. When adjusting splines in the curve/spline editor, I’ll work with in 20 to 40 frames at a time depending on what is going on in the scene. I’ll constantly compare the splined animation to the play blast of the completed blocking pass. I just want to make sure it all looks the same as it did in the final blocking. Once I’ve gone down the entire timeline I’ll go back to the beginning and do a polish spline pass to look for popiness in the elbows, knees, or even in the movements. And that is pretty much the jist of my process.

Focusing on stylization, during a thread titled 'Watch out, it's a ninja', you wrote:
'Most of my animations have been more realistic and so for this animation I wanted to push it to be cartoony like Kung Fu Panda style. If you frame by frame some of the action scenes in that movie you see a lot of the stretched frames.'
Please share some tips and advice for anybody planning to animate similarly.
Well for fast moving breakdown poses I’ll create what is called stretch frames. Stretch frames helps with two things, motion blur and smooth movement on the audiences’ eyes to follow. Sometime that requires me to break joints or bend joints the wrong way but when the average person watches it in real time they don’t see the joint breaking but the fast movement is easy on their eyes. A lot of beginners with fast moving animations don’t allow your eyes to see where a body part is moving from. In one frame a hand is screen right and then the next frame it move screen left with out showing you how that hand got there it just pops from one side of the screen to the next. If you add one or two stretch frames in between that show how the hand is getting there with or without breaking joints then it helps sell how the hand got from one side of the screen to the next. So maybe the fingers or even the whole hand would drag and stretch a lot. Think of 2d animations and how they motion blur fast moving limbs, they draw a single frame with multiple hands going from A to B or a hand that is stretched from A to B. I hope that all make sense :-)

Often lesser experienced animators are afraid to use simple acting choices through fear of indicating. Within the thread for your dialogue piece 'Milkshake', early critiques of your work felt the choice of finger pointing was too cliche. Yet, together with advice from your friends at Dreamworks, you stuck to your instincts and kept it in.
Please share some thoughts on this decision and how you keep such an open mind to others advice?
It’s kind of funny because everyone voted for my original figure eight finger point that was more unique then the one I have in there now. However, going back and looking at them both I do like the one that my friends from DreamWorks suggested. It does indicate the word “up” in the audio but I think it works for this animation because the character is a drama teacher reading from a book and it reminds me of a teacher I had in school that would basically act out the words she would read to us. But ultimately with Jeff, Wes, and JP I trust there input and listen to everything they say because in the end they are in the industry that I want to pursue and now I have my opportunity and I can’t wait to start which will be August 15th! 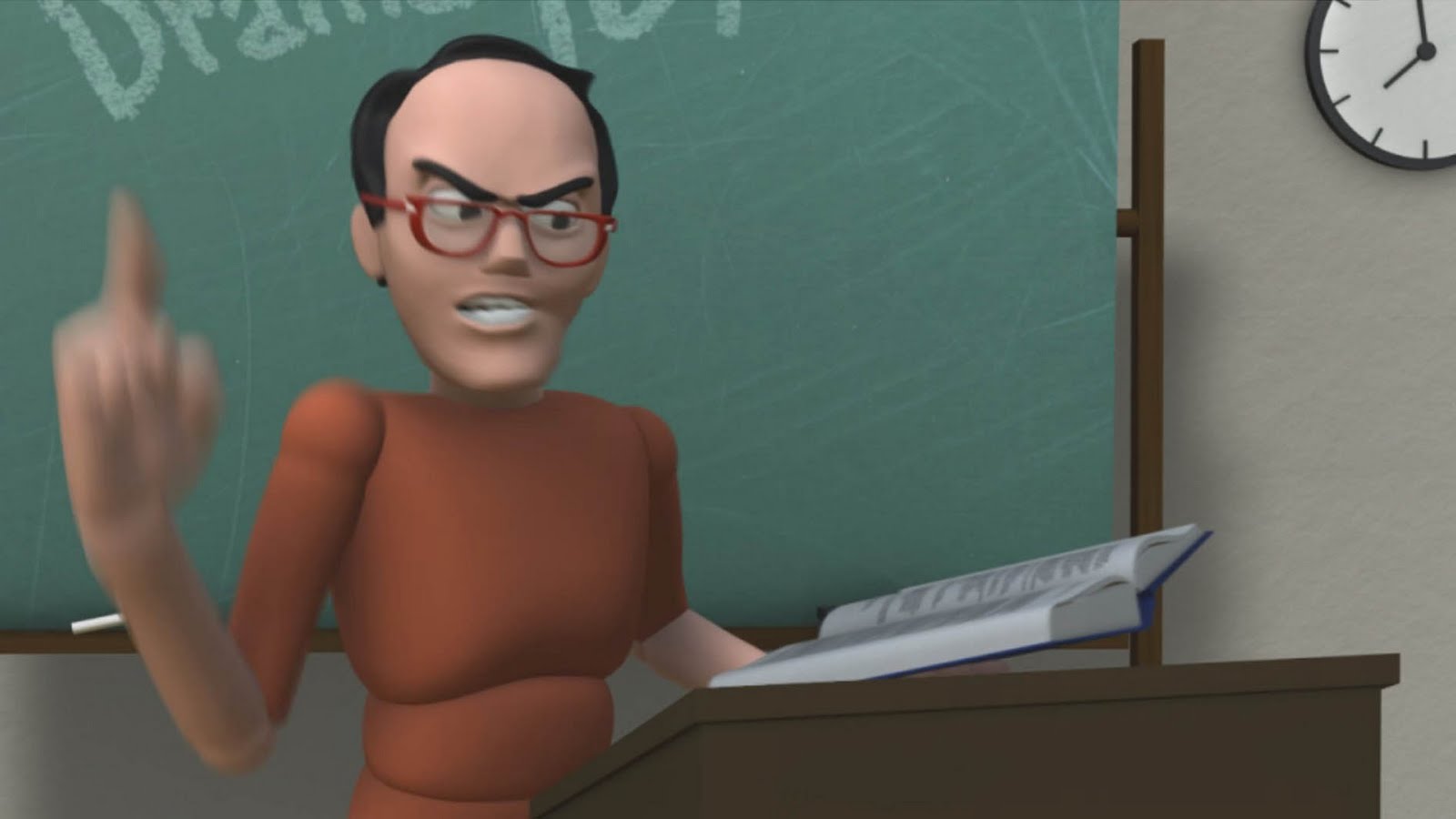 Thank you Jamie for your time and good luck at Blue Sky Studios. For those who wish to check out the work of Jeff Gabor, please click here. I particularly love the timing and character on the Scrat sword piece.
Interview by Steven Hawthorne
Posted by mini challenges at 10:33