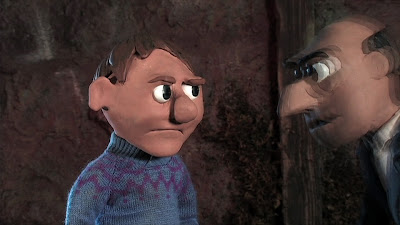 Here is a video tutorial on creating a motion blur effect in stop motion animation.

Strobing is a problem that can occur in stop motion animation when movement is so fast that the movement appears to pop across the screen.  This happens when the object moving does not overlap itself from one frame to the next.  In computer animation, this is fixed by checking the "motion blur" box in the rendering preferences.  In hand-drawn animation, motion blur is simulated by drawing the blurring effect. But it's trickier in stop motion.  A process called "go-motion" was developed in the late 80's that moved the puppet during the exposure, causing that part of the puppet to blur.  But who can afford a motorized puppet?

So I developed my own way of creating a motion blur effect that calls for a bit of additional editing. Certainly adding motion blur to bad animation won't make it better, and plenty of great stop motion animation is produced without it, but I think it's a fun effect.  It's a way of smoothing out fast moves, and can be done in a subtle way so it doesn't draw attention to itself.
Posted by Michael M Parks at 00:17