Grab It / Touch It

Having watched hundreds of 11 Second Club submissions over the years, not to mention dozens and dozens of reels from animators seeking jobs, I’ve begun to trends that separate the strong animation from the weaker animation. One of the tell-tale signs of a not-quite-up-to-par animator is a character whose hands don't believably interact with objects in the scene.

When your character holds something in his hand, a glass of water for example, it is very temping to simply link the glass to the character's palm and then universally rotate the fingers around the glass up to the point they begin to penetrate the geometry. It's quick and easy and it looks like the character is holding a glass of water. Except it's not that convincing.

In animation it's relatively easy to give the impression that a character is doing something. We can look at that character and say "Ah, the glass is moving with the character's hands, and the character's fingers seem to be wrapped around the glass, so I can reasonably assume he is meant to be holding the glass." The real artistry, however, comes in getting the audience to not even think about it: "Ah, that character is holding a glass of water." It's a subtle difference, but it's one that separates the mediocre animation from the animation that stands out and grabs your attention.

Let's look at a few quick sketches. This should illustrate what I'm talking about, and will hopefully inspire you to spend a little more time on your character's hands and fingers; they’re so important!

To start off, here’s an image of a hand grabbing a pole (or it could be a spear, or bars in a jail cell, etc.): 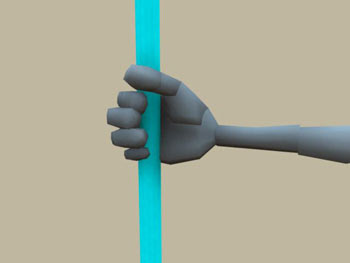 Looks alright, doesn’t it? I mean, when you see it, you definitely get the idea that the hand is supposed to be holding onto the pole. But all I’ve done is rotate the fingers in one axis, making them all wrap around the pole. You get the impression of a hand grabbing something, but nothing more. That's because our fingers don't really look like this when we're grabbing something.

With a few minor tweaks we can get something much more convincing. Remember you're not dealing with an actual human hand, you're working with a rigged character. Use that rig to create a picture even if you have to cheat things a little. Rotate the fingers in ways that a human hand can't achieve! It's not important that the rig behaves like a real-life person, it's only important that the audience believes the character behaves like a real life person. It's all up to what we see in the frame. A few small adjustments can give us this: 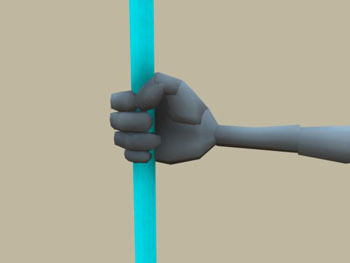 See? Now doesn’t that feel a little more solid and natural? I’m not saying it’s the greatest hand pose in the world, but it’s definitely an improvement over the first image.
To make it even more clear, look at the two images popping back and forth from one to the other:


Now, remember what I said about cheating? If I were to show you this pose from a lower angle you'd see some trouble spots: 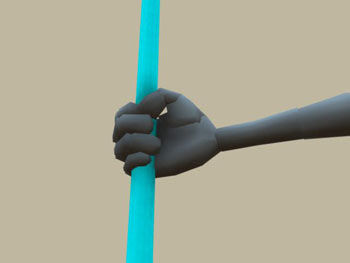 Because of this character's proportions I've had to rest the pole in the fingers (even allowing some penetration) instead of nesting it in the palm where it would normally sit if this were a real human. Also from the lower angle you can see that the thumb is bent and crooked and hardly making contact with the pole at all. Again, this isn't natural. But since I am posing the character for the camera view only, I can get away with these little cheats. They help me build a believable pose. You’ll never notice them unless you see them from the wrong angle–and if I’m a good animator, I’ll make sure you don’t see them from the wrong angle!
Let’s take another example. This is how I often see a character's hand resting on a table: 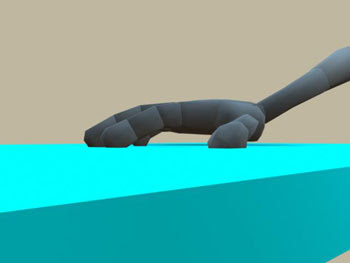 The fingers are all bent slightly, again only in one axis, giving the impression that the character is relaxed. But I notice that when I put my own hand down on a table, I get something a little more like this: The difference? For starters, my palm is resting on the table and that's what's supporting most of my body's weight. In the previous hand pose, the palm is hovering above the table–not very believable. Additionally, some of my fingers curl in underneath my hand while my index finger stretches forward.

This pose took a little longer to get right, since there was a lot of counter-animating of the wrist and the fingers to make sure they all looked like they were in the right place and not penetrating the table. But believe me, this is time well spent. Even if you don't call attention to that hand at all, your audience will feel that this character is alive and behaving naturally.

Here is the back-and-forth comparison:


Again, neither of these hand poses are spectacular. But they should give you a good sense of how, with a little effort and a little attention to detail, you can add a lot more believability to your scene just by tweaking your hand poses. Make those hands do whatever you need them to do. Your rig will not complain if you start rotating (or even translating!) its fingers into all kinds of crazy positions. As long as it looks good to the camera, your audience will believe it.