“I think a lot of animators are afraid of The Big Frame,” Jeff told me.

The Big Frame, Jeff explained, is a frame with huge spacing compared to the one preceding it.
Say, for example, you’re gesturing with your arm. Put your hand directly in front of you as far as your arm can stretch; then, place your hand out to your side, as far as your arm can stretch. If you can picture this move happening over one frame of film, that is a Big Frame.

The trouble is that many animators, especially beginning animators, will consider a Big Frame and think “Oh no. There’s no way that spacing will ever make sense–if that ends up in my animation, it will look like a pop. It will look like it’s not tied to physical believability. It will have no weight. It will be too startling to watch. I’d better make that gesture happen over many more frames with much smaller spacing.”

It's an understandable fear. We've all seen choppy animation and we know how amateurish it can look. We'd never want to invite that kind of wild staggered motion into our own work.
But fear of The Big Frame is largely based on a misunderstanding of how timing and spacing can work for you and make your animation exciting and dynamic.

Check out this Big Frame that Jeff animated:

Let's look at those frames side by side and see just how Big this Big Frame is: 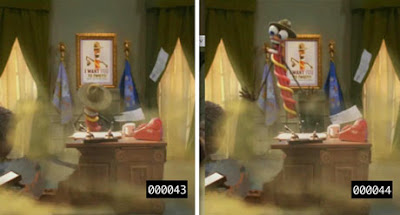 Whoa, that's huge! If you were to see these two images out of context you might assume that this is simply too big of a move to happen in one frame. Ah, but you’ve already watched it at speed and so you already know that it not only works but works in a very appealing way.

So, what gives? It doesn’t feel like it should work, and yet it works.

The answer can be found in the frames on either side of The Big Frame. The anticipation into the down position sells that Sarge’s energy is being built up and stored for a big release, and the followthrough sells that Sarge’s body has weight and is recovering its balance after such a dramatic jump. Frames 43 and 44 would be absolutely nothing without frames 38, 39, 40, 41, and 42 on one side and frames 45, 46, 47, 48, 49, 50, 51, 52, and 53 on the other. Scroll back up to that movie and take a look at those frames. Those are what make The Big Frame a success. Without them, frames 43 and 44 would look jarring and unbelievable.

Many of us dwell in fear of The Big Frame. Perhaps you think that if you don’t show every in-between frame to the audience, if you don't connect every nuance of a move, then the animation will look poppy and unrefined. But have some faith in the Persistence of Vision thing. When your eye sees an object in one place and then sees it again in another, your brain will fill in the gaps. Your eye, which is to say the audience's eye, doesn’t need nearly as much information as you might think it needs. It just needs enough to be able to get from one place to the next: Anticipation and Followthrough.

Have fun with your animation. Play around and experiment. Go for The Big Frame. See how far you can push it. You might be surprised how big a Big Frame can be.

note: this animation is taken from the Kelloggs Fruit Twistables ™ commercial Sarge’s Office
used with permission of Bent Image Lab, Portland OR
animator: Jeff Riley
Posted by Eric S at 19:47