Hands Out and Hands Down

Friends, I had such a big rant built up for this post. It was going to go something like this:

One of my biggest frustrations when posing a character is the lack of clothes to interact with. In particular, pockets. Any time I try to do some video reference for a scene, I usually end up putting at least one hand in a pocket, or hooking my thumbs into a belt loop or something like that. Then I review what I’ve recorded and I think “Darn it, I can’t animate that pose! We don’t have the simple CG technology to put hands in pockets! This is a fundamental flaw in the characters we animate, especially given how often I put my own hands in my pockets! It’s as if I’m being asked to animate a character with no clothes on!”

To demonstrate my angry point, I planned to post a ton of pictures demonstrating actors interacting with clothes, naturally, the way you or I would. I browsed around the movies on my hard drive, and immediately found these two: 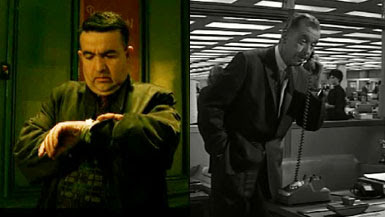 You see?? One man hand in a pocket, and another one pulling back a sleeve to check his watch. I was on a roll and went in search of other examples.

But I was in for a surprise. You see, despite having a whole library of really wonderful video clips on my hard drive, those two pictures were just about the only poses I could find to prove my point.

Most of the frames I stumbled across seemed to say that there are many natural poses that don't require any clothing interaction at all! Have a look at this one from All About Eve: 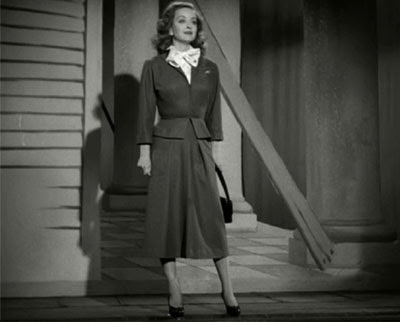 Bette Davis stands tall, strong, and defiant. Her arms are stiff and proud at her side, hands balled into fists. One of them is clasping a purse, but that's not really so hard to achieve in CG.

Searching further, I found this from an episode of Seinfeld: 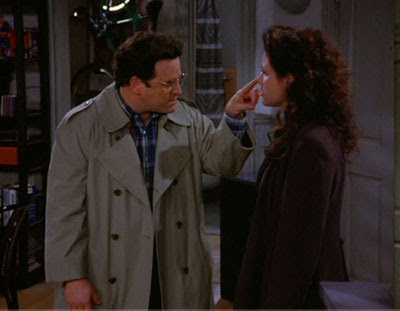 Of course the most obvious hand pose here is where George is bipping Elaine's nose. But check out George's other hand, the one that's resting casually at his side. It's not in his pocket, or on his hip, or folded across his chest-- it's just hanging there!

Seeing this frame reminds me of a classic acting student complaint: "I don't know what I'm supposed to do with my hands!!" When we're conscious of what our hands are doing, we feel unnatural letting them hang by our side like this. But that's only because we're paying attention to them. If we somehow let it slip from our minds, we'd see that peoples' hands dangle there all the time without needing to fidget about with pockets, sleeves, and all other kinds of clothing.

Let's look at a few more frames, shall we? Here's The Dude in The Big Lebowski: 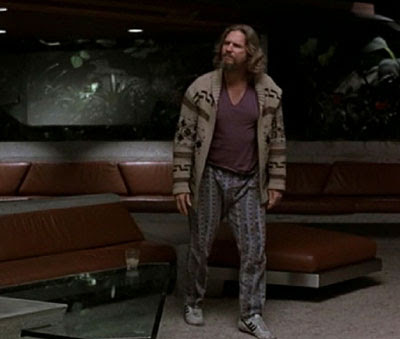 While checking to make sure he's not being spied sneaking around Jackie Treehorn's house, where are his hands? Pretty much relaxed at his sides, closely following the line of action of the rest of his body, I might add. In this case, I think the hands actually add to the comedy of this pose.

And here are some men talking to Eddie Murphy's character in Beverly Hills Cop: 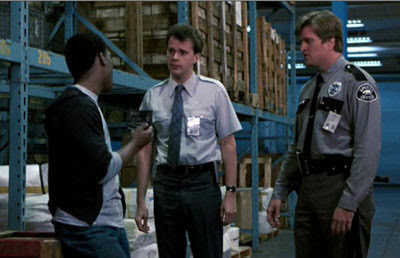 Look at both of them. The manager in the white shirt has his hands hanging limply at his side (I'm not going to question why one arm looks so much longer than the other), and the security guard's arms kind of rest naturally in front of him in a way that almost feels unnatural, but there they rest. They kind of help add to the feeling of him being a big, dumb lummox of a character, don't you think?

All of these examples show arms and hands that hang at the actors' sides. And this is just the tip of the iceberg. You can find poses like this all over the place. It tells me that when you're animating, you don't have to worry about your character shoving their hands in a pocket; you don't have to play into that old "I don't know what to do with my hands!" chestnut from acting students who don't know better than to relax naturally. Just let your character's arms hang by the side of the body.

Unless you're using them to enhance your pose, of course.

In these final set of photographs, taken from the dust jacket of Steve Martin's wonderful memoir Born Standing Up, we see amazing examples of just how funny and expressive you can be with your whole body, and your arms in particular. In the 1970's, Steve Martin would play comedy shows to sold-out arenas in front of thousands of people. How did he make sure that everyone could see him on the stage, even if they were sitting far far far away? He wore an all-white suit and made his poses as big as he possibly could: 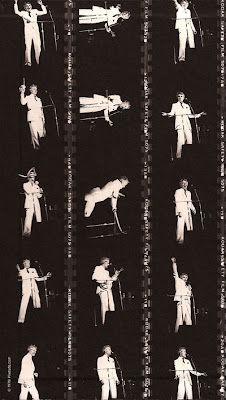 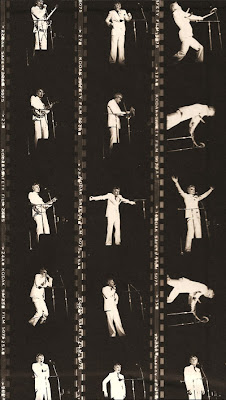 In a recent post on Internal Silhouette I encouraged you to think beyond the possibilities of just the singular silhouette of a character shaded in all one color. And while I still believe that you can get some great results by using an Internal Silhouette, I also believe that you can find some pretty spectacular poses that read as just one solid silhouette. After all, if it's good enough for Steve Martin, it should be good enough for me.