Hello guys and gals,
I am hoping to build a list of 11 valuable tips for animating the eyes. I must apologize that there are only five listed here so far. There are more to be added, this post is a wip and will be finished soon. I just felt it was important to something up as I have had a few people ask me.
Secondly, I wish to thank those who helped on the post. This is certainly a community effort, with links and thoughts being provided by many.

Hope you find these helpful

In Disney's Illusion of Life, there is a great discussion about changing the size and shape of the pupil. The early development of Mickey Mouse illustrate how adding more detail, can provide more options. But in the case of Winnie the Pooh, the character designs were based upon dolls. The eyes, were returned to simple buttons, meaning the head had to turn for character to looking at something. This added to the characters appeal.
To view a wealth of model sheets on the new Winnie the Pooh movie , please visit Stitch Kingdom

In his autobiography "Talking Animals and Other People" Shamus Culhane talks about contracting the irises to pinpoints in expressions of fear.  This was based on actual physiological research and which was used it on the animation of the Fox in "Pinocchio." Just look at the contrast between the eyes of the fox and those of the coachman.
Always be aware of why you are making your choice. Illusion of Life also talks about how some symbols have became old, such as the knocked out look. In some stylised animation, this device could work great. Your character is an individual, so never be afraid to try new things and see what works for you. 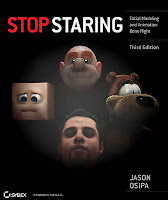 In his book Jason Osipa teaches you not only how to animate a face, but how to model and rig too. It is also a great place to learn lip sync.

Accompanying his book, is a cute and helpful rig called Cubey. Through Cubey, Jason introduces animators to his methods of controlling the brows, lids and pupils. He uses the brows as a last resort in creating an expression, as an icing on the cake, with much being communicated through lids and head tilts.
Recommended by many in the animation world, this truely is a great read!


Tip 3: visit Kevin Koch
Kevin Koch's site synchrolux.com holds many treats and delights for animation students, both beginner and expereinced alike. One area of his site, holds 6 high level discussions on eye movement. A golden gem is his section on flavoured blinks, presenting a beautiful example from The 400 Blows. A great cure for Randomblinkitis :)

As well as discussing how to use blinks to add character, Kevin also creates a deep discussion into how to create a vanilla blink. Those who have tried a vanilla walk cycle should know that there is more to it than meets the eye (sorry about the pun). A few live footage quicktime clips are included, so we can study for ourselves how much goes into this little action.

Struggling to understand put in practice expressive eyebrow movement. Carlos Bauna's page really helps build the connection between the two brows. Delightfully simple read, that will provide an 'eureka' moment to many.

Animation Mentor is the leading online school for character animation. They have released a free ebooks, a collection of tips and tricks to really help add some life into your characters. During the read, you'll learn about randomblinkitis, an alien disease that really sucks the life out of your characters. Is there a cure? Download the book, have a read and find out!

Posted by mini challenges at 04:26