Outline
A picture says a 1000 words. Imagine how many a well thought out animate scene can say? Well sadly a 1000 words isn't always the case. If we don't put enough thought and planning into an acting shot the only word we may leave the viewer with is, "huh?"

So this challenge is all about telling the story with only a few well thought out images, that hopefully will leave the viewer wanting to see the finished scene.

Just to get your creative juices flowing, and to set the bar ridiculously high, here is an example of what we are looking for using a great scene from Huncback, of the cardinals song hellfire. 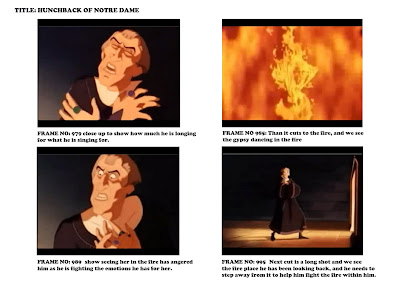 Notice the first image is a close up to show how much he is longing for what he is singing for. We can really only see his face and his hand gestures, as these really convey that emotion so well, and at this point its the only important thing we need to see.

Than it cuts to the fire, and we see the gypsy dancing in the fire and we only see her and we know this is what he is longing for.

Cuts back to the same shot as the first and we see how seeing her in the fire has angered him as he is fighting the emotions he has for her.

Next cut is a long shot and we see the fire place he has been looking back, and he needs to step away from it to help him fight the fire within him. We could keep going on how amazing each shot choice is for this scene, but eventually the fire surrounds him and turns into cloaked figures judging him and back to fire and he gives into his lust for her.

The Challenge
Take June's 11secondclub audio clip, and putting our own unique story to it. I want you to think of at least three different images that tell your story, and if you want try to add some well thought out camera cuts to enhance what you are trying to tell.

This is your chance to show an idea that you may not have had time to create. Or possibly show off some illustration skills if you usually work in 3d.

Now go download this months audio and have fun!

Submission
The work should be submitted as a jpeg, a4 size with 300dpi. It should presented in a similar template as shown in the Hunchback of Notre Dame example. Don't forget to show frame numbers.
Posted by cosmicfool at 01:20